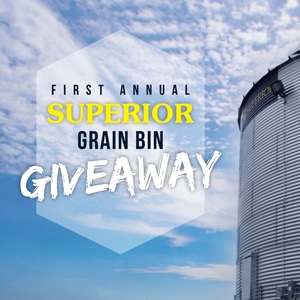 Superior Manufacturing is giving away a farm grain bin to people who register at the company’s booth during one of several industry tradeshows in 2014. The company will announce the winner of a 3607 Superior Bin Package in a random drawing on Aug. 1, 2014.

“Our bins have been a staple of many successful farms and ranches throughout the United States,” said Trever Meier, Superior’s director of sales and marketing. “They’re the most robust bins available today, and we stand behind them like no other company in the industry.”

The roof includes 3½-inch-deep rigidized roof ribs that are each clamped with locking brackets for security, as well as roof sheets that are bolted to the sidewall sheets in four locations to ensure there are no weak points. The roof also comes with six of the industry’s largest vents, which are 20 by 20 inches.

Superior forms its Herculok® floors without removing steel so they are 12 percent heavier and twice as strong as the floors in competitors’ bins. In addition, Superior bins come with deep rib floor supports with extra steel and breaks that have proven to be four times stronger than the supports in competitive brands.

Superior bins feature an 11-inch U-trough with power sweep to provide a maximum unloading capacity of up to 6,000 bushels per hour. The 3607 Superior Bin Package includes inside and outside ladders.

No purchase is necessary to enter or win the 3607 Superior Bin Package, nor will a purchase increase chances of winning. All giveaway rules and regulations can be found here.